Robert Ervin Howard (1906-1936) makes a good follow-up to William Gray Beyer as they were the only two pure pulp writers that Gnome published. Howard’s life story is almost a pulp product itself, the tale of a sickly loner who succeeded in building himself up, physically and psychologically, going from a small nowhere town to national fame and then taking his life at the seeming height of his success. 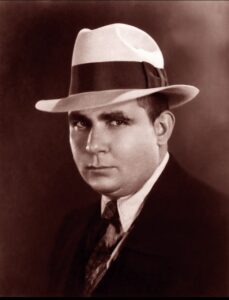 Howard was the son of a country doctor in Texas, hauled through a series of oil boomtowns. When he was fifteen he first discovered pulp magazines, instantly hooked by the adventure tales of authors like Gnome’s Talbot Mundy. Howard began sending off a stream of stories and poems and receiving back an equally steady stream of rejections. His breakthrough appeared in the July 1925 issue of Weird Tales, a short story called “Spear and Fang,” the title encapsulating his entire future career. That issue also contained stories by H. P. Lovecraft and E. Hoffmann Price, with whom Howard would cultivate friendships via long letters but never met.

“I took up writing simply because it seemed to promise an easier mode of work, more money, more freedom than any other job I’d tried,” he wrote while still in high school. That promise beckoned across a series of bad jobs and small, irregular sales for almost a decade. Not until 1930 did he earn a livable annual income from writing alone. As with many pulp writers his work ranged across genres, including his special interests like boxing and the west. Howard tried generating series characters – a source of reliable sales and revenue – nearly a dozen times before trying a notion about a northern land called Cimmeria and the adventures of a barbarian strongman named Conan. “The Phoenix on the Sword” appeared in the December 1932 Weird Tales, set in the middle of Conan’s long life. It’s immediate success with readers led Howard to fill in Conan’s backstory and future rise to kingship in sixteen more stories for Weird Tales through 1936.

Conan has since overshadowed every other aspect of Howard’s writing. Few except Howard obsessives realize that he had mostly abandoned Conan and what became known as sword and sorcery by 1935, instead writing dozens of stories set in his beloved west. His first book, in fact, was a collection of western yarns featuring the brawling Breckinridge Elkins, slightly revised to make them appear to be episodes in a novel and released in 1937 by the British publisher Herbert Jenkins under the title of A Gent from Bear Creek. Don’t bother trying to find a copy. The book simply disappeared. Almost literally. Maybe a dozen copies have survived.

It certainly didn’t help sales that Howard, a mere thirty years old, didn’t live to see the book appear. When told that his mother, sick for many years, was about to die from tuberculosis he went outside and put a bullet through his brain. Few pulp writers died that way but probably all the ones who did generated cults.

Even so, the cult of Robert E. Howard developed slowly. An obscure western published in England was not the vehicle to spawn one. Several additional deaths needed to intercede and even more twists of fate. Indeed, but for a slight twist of fate, A Gent from Bear Creek would have been Howard’s second book and the book that wasn’t made all the difference. Back in 1934, with fewer than 10 Conan stories published, another British publisher, Dennis Archer, approached Howard for a Conan novel. Archer went bankrupt after receiving the novel and it languished for a year until Weird Tales serialized it in the five issues from December 1935 through April 1936 under the title “The Hour of the Dragon.” It would be the only Conan novel and eventually a prize that created an empire when, by a twist of fate, it fell into the hands of Marty Greenberg.

How that happened is a saga all to itself. Today Donald M. Grant, Publisher, is a legendary name in the field, redolent of high-quality special editions of great bibliographic, historic, and aesthetic value. In fact, Grant reprinted the Gnome Conan volumes in the 1970s, a major force behind the Conan renaissance then taking place. In the 1940s, though, he was another wannabe whose several imprints flickered briefly in the sky. One of those was the Grandon Company, whose first book was 1949’s The Port of Peril by Otis Adelbert Kline, a Burroughs-style pulp writer of the 1920s turned literary agent. In 1933 he had become Howard’s agent. The connection seems obvious, except that Kline died in 1946 and Oscar J. Friend, another old-school pulp writer turned agent, bought the agency in 1948 from Kline’s daughter. Kline had had little success in moving material to generate royalties for the Howard estate, but Friend saw possibilities in the many small presses being formed in the late 1940s. Grant had already contacted Kline’s daughter about reprint rights and then made a deal with Friend. It all seemed settled except that Friend required payment for those rights. That’s where Kline’s ghost bedeviled Grant, who couldn’t come up with the money because all his capital was sunk into Kline’s book, a book that sold almost as badly as A Gent from Bear Creek. As a conscientious agent, Kline had to move elsewhere and Greenberg stepped up early in 1949, snatching the rights just when Grant dropped them.

That coup spawned a run of seven Conan books, more than 10% of Gnome’s entire output over the next seven years. Over the years Howard and Conan went from being semi-forgotten legacies of the pulp era in the 1940s to world-famous brand names. Every scrap of paper with Howard’s name on it is now fodder for obsessive fan scholarship. The quotes and timelines that follow here and on other Conan titles are taken from articles written by Rob Roehm, Director of Publishing at the Robert E. Howard Foundation. 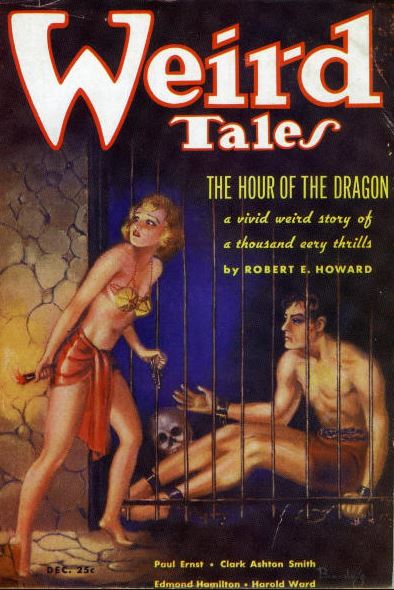 On May 9, 1949, Greenberg wrote to Friend, saying that “I get more enthusiastic every day when I contemplate what a terrific deal this is going to be.” He hoped to “do one of the Conan books this fall.” His enthusiasm got ahead of him. The first Conan book wouldn’t appear until October 1950. Nevertheless, Greenberg wasted no time in boasting. A book titled Conan the Conqueror appears on the back of 1949’s Pattern for Conquest and Sixth Column as part of the “GNOME PRESS BOOKS FOR SPRING 1950″ house ad. Fans must have deeply furled their brows as the description gave no clue that, not for the first time, Greenberg was changing the title from the original magazine appearance.

The most famous barbarian warrior of them all, Conan, at last in book form. Colorful excitement in the legendary kingdoms when earth was young.

Dave Kyle later would write that he wrote the blurbs, but you’d think that tossing a stone into a random gathering of sf writers would hit someone who could do a far better job, and would offer to do so just to get them to stop tossing the stones.

Kyle is credited with the cover design, equally bland, with a John Forte illustration of a sword-wielding warrior surrounded by overpowering typography. Kyle presumably also designed the boards, whose template would be more or less followed on the succeeding six Conans. That was part of the plan Greenberg had with Friend, who wrote to Dr. P. M. Kuykendall, the executor of the Howard estate, that:

I have arranged with Gnome Press to publish all the Conan stories in about five uniform volumes as a set (although the book will be printed at the approximate rate of two volumes per year) with the same binding and with end maps in both front and back of each book – maps of the world in which Conan lived and roamed.

The resulting book immediately rewarded opening, with that two-page map of Conan’s world spread across the endpapers. It’s a spiffed-up version of a map hand-drawn by Howard in 1932, and bears the label:

A New and Exact MAP of the World of Conan in the Hyborean Age. According to the Actual Notes of R. E. Howard. With Map of Europe superimposed for reference. Made by David Kyle. 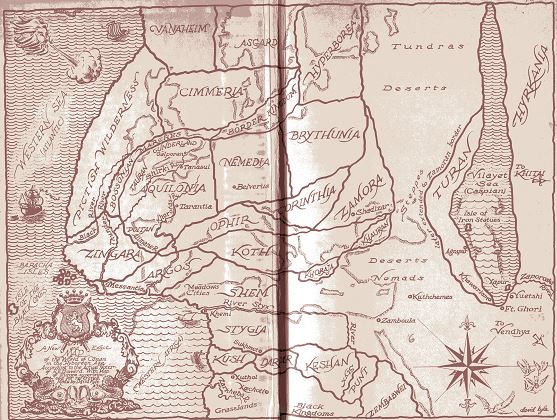 A fairly major nit to pick. Howard spelled the Age “Hyborian.” Gnome would use the variant spelling “Hyborean” for the next four books as well, though Kyle must have had Howard’s spelling to go by and the “Introduction” by John Clark also spells it correctly. Still, the instantly iconic map would be reused on the endpapers of King Conan and The Sword of Conan, as an insert in Tales of Conan, and as background across the cover and onto the front flap of The Coming of Conan. One of the least known items of Gnome ephemera is a loose endpaper of the map, signed by Kyle.

And it was reused later when Conan became an industry, much to Kyle’s chagrin.

I worked from an original drawing which Robert E. Howard himself had made. I still have my original. The worthiness of it is attested to by the countless number of times it has been reproduced in many editions. I’m proud of that. Not so nice, however, is the way it was treated — my name was removed, no doubt to avoid any idea of payment to me. And some of the ornamentation was either removed or reworked in an inferior fashion. Ethics and courtesy so often is submerged by the crass world of money and unaesthetic publishing.

“All in all,” Friend wrote to Kuykendall on August 10, 1950, “the project promises to be a fine piece of work and should net the estate a tidy sum over a period of several years.” A “tidy sum” is relative. Annual royalties paid to Kuykendall had been in the area of $25 a year until then. On May 10, 1951 Friend wrote that Gnome “paid us $100 before, and now have made another $100 payment” toward royalties. An additional $200 arrived in July.

History was made but, as usual, it did Greenberg little good. Conqueror was a hit, as was King Conan, according to a retrospective article by Roy Thomas, the writer of the Gnome comic series at Marvel, but the other five sold weakly, certainly not to the levels of Asimov and Clarke. Worse, Greenberg couldn’t get fantasy by anybody else to sell at those levels. The 1950s were the era of science fiction, not fantasy, or even “science fantasy” as Conqueror was described on its jacket cover. Clarke and Asimov required second editions; Howard never did. Conan wouldn’t strike it big culturally until the 1970s, when a series of paperbacks edited by L. Sprague de Camp and Lin Carter joined with Thomas’ comic book version and Grant’s high-end hardcovers. The best that can be said is that, unlike The Path to Peril, the Conan books didn’t set Gnome back and kept the company stumbling on, inch by inch, through 1957. And eventually be collector’s items collectively worth thousands.

Damon Knight, Worlds Beyond, February 1951.
Conan is, to be frank, a big lump: not bright, of undistinguished character, and not even especially agile. … But the story has an adventurous sweep; it never slows down for a moment; and in the end, the reader may find himself with a curious, apparently causeless affection for Conan and his world.

August Derleth, Madison Capital Times, March 3, 1951
In his introduction, Dr. John Clark emphasizes Howard’s greatest virtue: “He was a story-teller,” never much of a stylist, but certainly a born story-teller.

Groff Conklin, Galaxy Science Fiction, January 1951
[It] is a colorful action story, in many ways a delightful piece of relaxation reading. 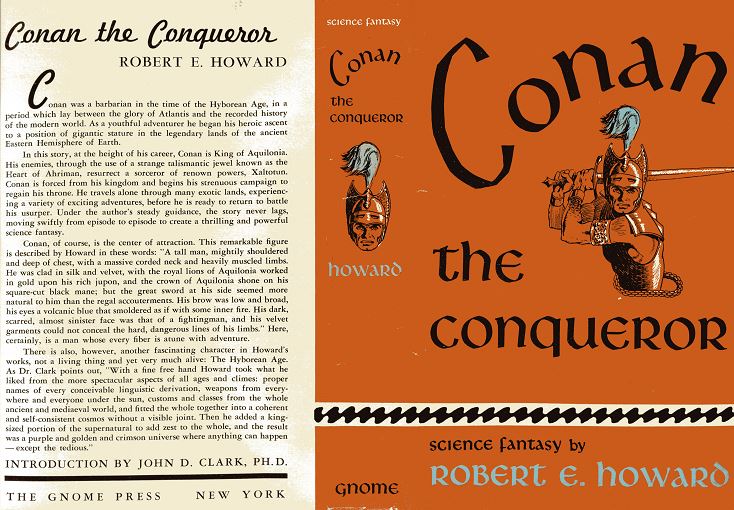 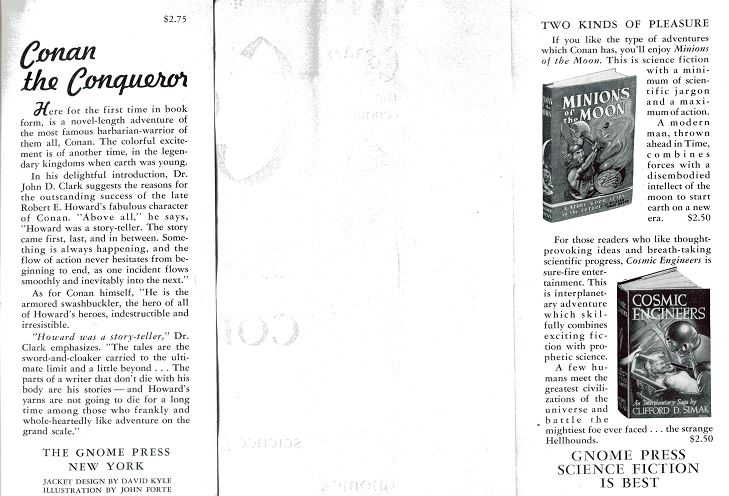 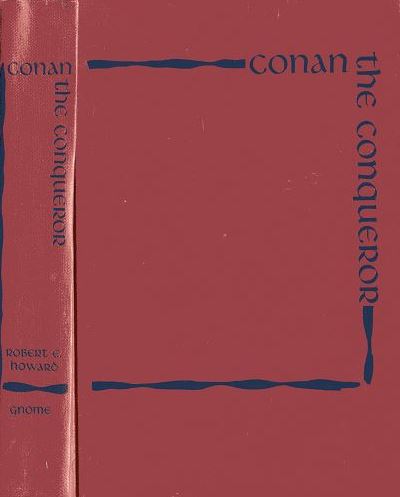