Frank Owen (1893-1965) was born in Brooklyn back when it was still a separate city and died there 72 years later. If he traveled outside Kings County in those 72 years, it’s news to the entire internet. Such travel can only be inferred from his burial ground, the Long Island National Cemetery, implying military service of some sort at some time. Yet his years of studying Chinese culture and mythologies led to a long series of books that were called “charming,” “delightful,” “exquisite,” “outstanding,” and “phantasy of the highest order,” which made him a major name, reviewed almost inevitably in rapturous terms, without the need for uncomfortable travel. A role model for all us writers, especially those of the f&sf variety.

Virtually nothing is known of his life except through his books. Terence E. Hanley, on the Tellers of Weird Tales website, compiled the only biographical information I can find. Frank was the ninth and youngest child of Henry and Henrietta (or possibly Henriette) Owen, who emigrated from Wales in about 1884. Their last four children were born in Brooklyn. The second youngest, Ethel, three years older than Frank, also became a writer in her own right and collaborated with Frank starting in 1927, issuing at least eight volumes of children’s stories and poems bearing the authorship of Frank and Ethel Owen. By that time, Frank was long married, to Lillian, who was born in Pennsylvania in 1898. They had two sons, Richard (born 1922) and Owen K. Owen (born 1930).

Frank Owen started publishing in 1915, when “Broken to the Halter” appeared in the January issue of Young’s Magazine. Despite the title, the story was probably not a western, since the magazine printed breezy stories of easterners. (He would in fact be published several times in Breezy Stories.) Of more genre interest, Owen started selling to Weird Tales in 1923, landing 31 stories and five poems there over the next two decades and three in the 1950s, his last story ever being “The Unicorn” in the November 1952 Weird Tales.

He was widely prolific in the years between. At least 35 other stories under his name were published in other pulps while he was writing for Weird Tales. Three novels of Oriental fantasy accompanied the many short stories. A few stories appeared as by Richard Kent. He edited 10 anthologies for teen-agers and three for mystery lovers.

And he wrote poetry under the name of Hung Long Tom, reflecting the casual racism of the time. Was it as deliberately salacious as it seems today? Possibly. Owen wrote at least ten racy modern novels – along with one Breezy Stories short –under the name of Roswell Williams, to wildly mixed reviews. No list of all ten seems to be available elsewhere, so for others’ convenience I’m providing titles and dates. Professional Virgin (1931); Three in a Bed (1932); The Damned Lover (1933); Vagabond Lady (1934); Hand-Made Lady (1934); Madonna of the Damned (1935); Lovers of La Fab (1935); Loves of Lo Foh (1936); Dark Destiny ( 1936); and Woman without Love? (1949). Several of them also have Chinese subjects for those interested in Orientalia.

For some reason, this pseudonym overtook his many publications under his real name, to the point that Donald H. Tuck, in his The Encyclopedia of Science Fiction and Fantasy Through 1968, puts his entry under the Williams name without noting a single title written by Williams. The only picture of Owen I’ve been able to find was a publicity shot accompanying the release of The Loves of Lo-Foh and that names him as Roswell Williams.

Owen did do a newspaper interview, which appeared on March 28, 1933 in, where else, the Brooklyn Citizen. Much was made of his being a native Brooklynite but little else that would define him or round out his personality. He wrote his first story when he was twelve. He had little schooling, preferring to read on his own “things not always included in a college curriculum.” Chinese stories flowed from his pen “because the subject interested him vitally.” Did he write from experience or imagination? Both. No travel is mentioned, though, or a wife and children, or the sister he wrote with. The only personal detail offered was that he did not like spinach but ate it with relish, belying his appearance, which was that of a cream puff fan.

Four collections of Owen’s short stories, which included some new work, drew the superlatives quoted above: The Wind That Tramps the World, 1929, The Purple Sea, 1930, Della Wu, Chinese Courtezan, and Other Oriental Love Tales, 1931, and A Husband for Kutani, 1938. A “best-of” collection, taking stories from these earlier books along with two brand new stories, must have seemed like a sure bet to Greenberg. Owen was a nationally-recognized name and an author with deep roots in the f&sf genre magazines. Giving the Gnome collection the name of one of these original stories was sure to intrigue those who thought they were thoroughly familiar with his works.

Gnome gave the book a better package than Kyle managed for The Carnelian Cube. The book was registered at the Copyright Office as The Porcelain Magician: A Collection of Oriental Fantasies; the subtitle also appears on the title page. Emphasizing the theme, Frances E. Dunn, the only woman Gnome ever had do a cover, gave them a fine pen and ink sketch of a Chinese-style dragon with a young Chinese man sitting comfortably in its open mouth. A smaller dragon sat on the spines of both the dust jacket and the boards. Inside, each of the fourteen stories were introduced with a sketch, some of them female nudes, a rarity for the time. The only off note was the book’s size, a mere 5.1 x 7.2”, by a fraction the smallest book Gnome ever published. Many of the small presses varied sizes from book to book for no reason apparent to buyers, who disliked the lack of uniformity. After two more smaller releases over the next year, Greenberg would stick to a common size, except for anthologies, made a bit bigger to emphasize their special value, and a smattering of second printings.

Greenberg learned another lesson from Porcelain: readers wanted science fiction, not fantasy. ESHBACH wrote, “The second Gnome Press book was a near-disaster. … The Carnelian Cube was a so-so seller – but no one wanted the Frank Owen story collection.” Not a single hit for the title comes up in two major news databases, a unique lacuna among Gnome’s first 50 titles. Greenberg, so proud of his line in every other way, pretended the title never existed. After a mere three mentions, it vanishes off of back panels at the end of 1949. It isn’t pictured in the 1951 catalog, although it was part of the order list. The Carnelian Cube received almost as little attention, but that name keeps reappearing on back panels as late as 1953. Porcelain is an outlier in every way.

Unsigned, Thrilling Wonder Stories, December 1949.
For quiet reading, for thoughtful reading, for those who like to relax in jasmine-petal charm and the redolence of Chinese teas as in a warm bath, the stories in “The Porcelain Magician” make ideal companions.

Note: The Acknowledgments page states that “The Old Man Who Swept the Sky” and “The Golden Hour of Kwoh Fan” originally appeared in The Dance Magazine, A MacFadden Publication.” I have been unable to determine the exact issues. 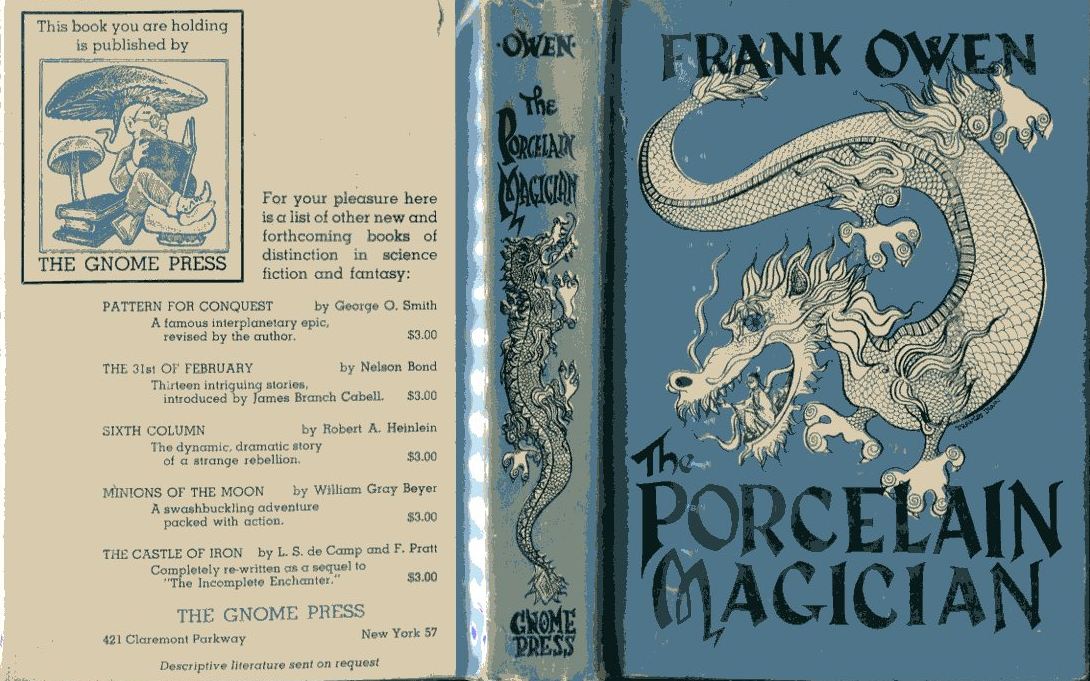 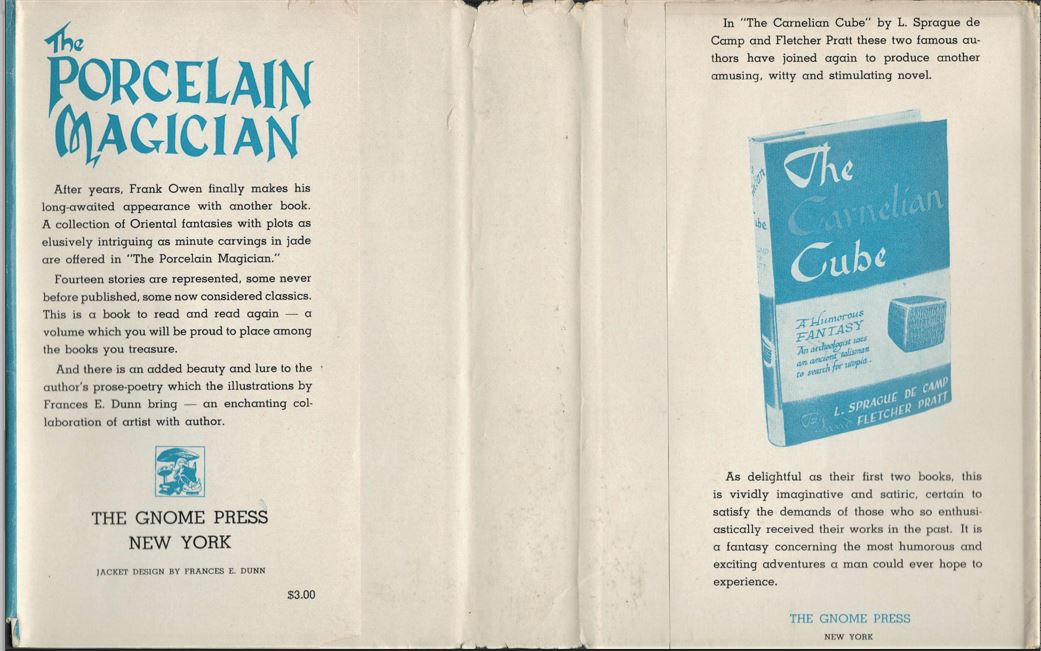 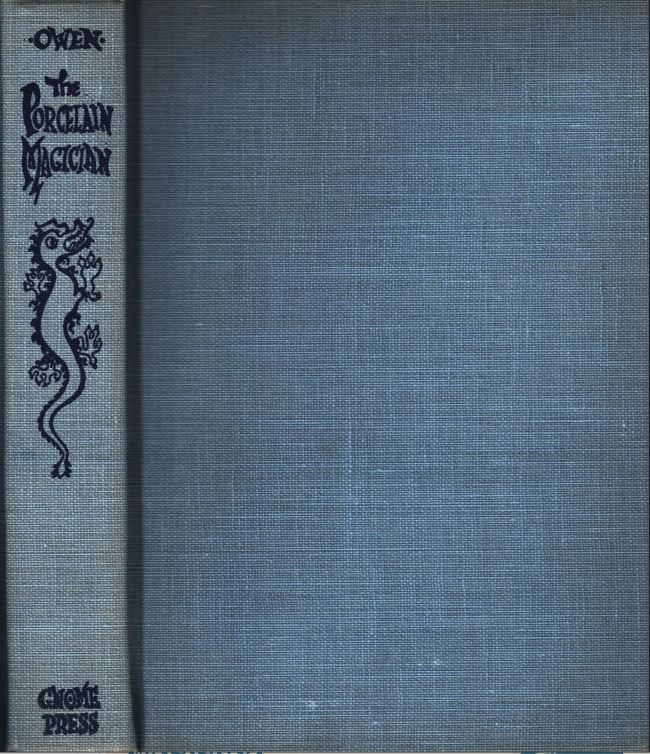