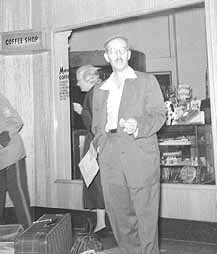 Marty Greenberg didn’t stint when it came to his own books. His seven anthologies are some of the nicest work Gnome presented to the public. He made them slightly larger than his other titles, 8.6 x 5.7″, and they normally ran to more than 300 pages, making them thick handfuls. Each of the first six are in cloth-backed boards, meaning that a strip of cloth was bound around the spine extending an inch or so into the front and back boards, a classic and classy look. Embossed into the purple cloth on Men Against the Stars is a rocket ship at the bottom blasting off toward two stars at the top. Though each book modified the image, this general motif would last throughout the five books in the Adventures in Science Fiction series.

Also on the cover of Men Against the Stars is the conceit of this book, “AN ANTHOLOGY/Arranged as a Future Story/of the Conquest of Space”. He explains what that means in his Foreword:

This book was planned from the very beginning to be more than just a collection of interesting adventure stories. It was organized around a central idea, one theme which moves logically from story to story. By building upon this theme, we who prepared this book sincerely believe, a new idea in science fiction anthologies has been developed – a science fiction anthology which, taken in its entirety, tells a complete story.

It’s hard to know how seriously the reader is supposed to take this. Obviously each story exists in its separate universe with a separate history and timeline. The book begins with Isaac Asimov’s “Trends,” in which a wave of religious anti-scientism prevents the first launch of a manned vehicle until 1978, and ends with L. Ron Hubbard’s “When Shadows Fall,” which is set in the far, far future on a dying Earth that is part of a 600-world Confederated Systems. As indicated in Willy Ley’s “Introduction” the one unifying theme is the spaceship itself, part of the propaganda campaign that science fiction writers along with a handful of scientists had began to wage to get the world’s mind off the V-2 and onto space exploration as a glorious future. Not very surprisingly, that was the all-but-written-in-stone policy of Astounding and every story here but one originally appeared there under John W. Campbell’s editorship.

Most sources cite this as the first science fiction theme anthology. I don’t understand why this collection of space stories is any more of a theme than the collection of space stories in Invasion from Mars: Interplanetary Stories, published the year before by Dell. Future theme anthologies would have no deeper connecting thread than that. Keeping it inside the field, I guess.

“But it always ends up with the spaceship,” Ley’s intro ends. That’s some good propaganda there. Almost 65 years later and most people still don’t consider a work science fiction unless it has spaceships. 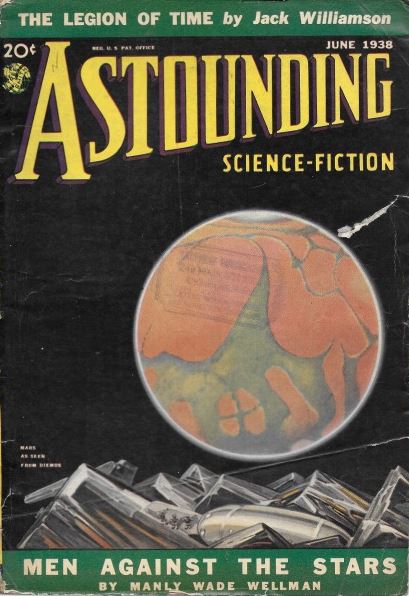 From the start, Greenberg planned to regularly issue anthologies, evidenced by the banner that reads Adventures in Science Fiction Series along the top of the front cover. This banner would be repeated on his All About the Future, Journey to Infinity, The Robot and the Man, and Travelers in Space, but not any of the other anthologies Gnome issued. Despite this evidence of planning, the evidence also shows that the volume was rushed out as Gnome’s first book of 1950. I say this because it is referenced as THE BEST BUY OF 1950! on the rear covers of both Pattern for Conquest and Sixth Column but without any title. Why rush out a planned series opener without adequate advertising? Another Gnome mystery.

ESHBACH calls the Adventures in Science Fiction series “the most successful of all the Gnome Press books.” Each of the first three went into a true second printing, distinguishable by changes on their back panels. Men reappeared in 1952, sharing a back panel with Greenberg’s Five Science Fiction Novels collection. This second printing was a massive 3000 copies, making a total of 8000 copies printed. No other Gnome title saw the 8000 figure except for the three printings of Clarke’s Sands of Mars. CHALKER has “Reprint: Gnome, 1955, 3000 copies, so marked.” [bolding in original] What “so marked” might mean is mysterious, as there are no internal differences between the two printings. Also mysterious is the 1955 date. The back panel contains no titles later than 1952’s The Sword of Conan and bears no resemblance to the 1955 lists of titles. 1952 is by far the more likely date.

One odd sidelight. Most bibliographies report the contents of the anthologies using the exact titles and authors of the stories as given in the table of contents. That makes sense because Greenberg normally is faithful to the way the stories first appeared in the magazines. On the contents page of Travelers of Space, the story “Columbus Is a Dope” was credited to Lyle Monroe even though by that time it was no secret that Monroe was a pseudonym for Robert A. Heinlein, who is credited on the copyright page. Greenberg does the same here as well. “Competition” is listed as being by E. M. Hull in five separate places: on the copyright page, in the table of contents, on page 253 where the story begins, and on the dust jacket spine and rear flap. That’s as it should be and the way it was listed in the June 1943 issue of Astounding. The oddity is that both CHALKER and KEMP record it as being by E. Mayne Hull.

Edna Mayne Hull is listed in the ISFDB as the author of 11 stories, all published by John W. Campbell in either Unknown or Astounding from 1942 through 1946. Mayne, as she liked to be called, was the wife of A. E. van Vogt, whom she married in 1939. Four of her first six stories were published as by E. M. Hull; the rest as by E. Mayne Hull. Nobody doubts this; it’s the lack of consistency by the bibliographers that’s puzzling.

Asimov’s “Bridle and Saddle” is an entry in his Foundation series. Therefore it appeared as the chapter titled “The Mayors” in Foundation, published by Gnome the next year, making it the only work to be published twice by Gnome.

Fletcher Pratt, New York Times, July 2, 1950
In all, however, Martin Greenberg has done an extremely good job of choosing his entries.

P. Schuyler Miller, Astounding Science Fiction, November 1950
It’s fine stuff for introducing the teen-ager to science fiction, and for nostalgia aficionados, but science fiction has matured, and this book represents its early adolescence. 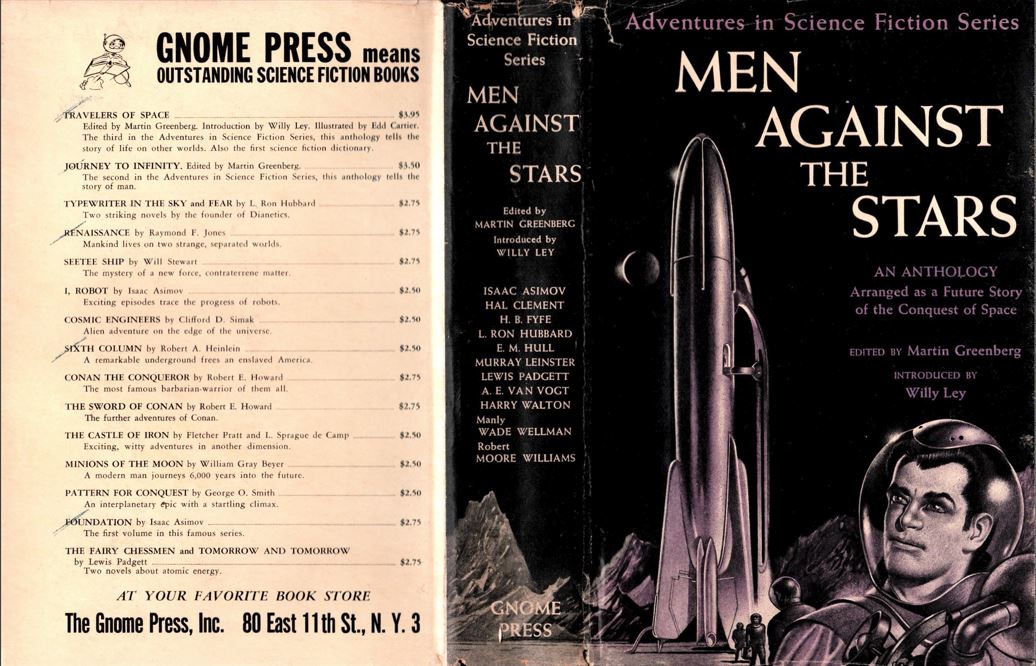 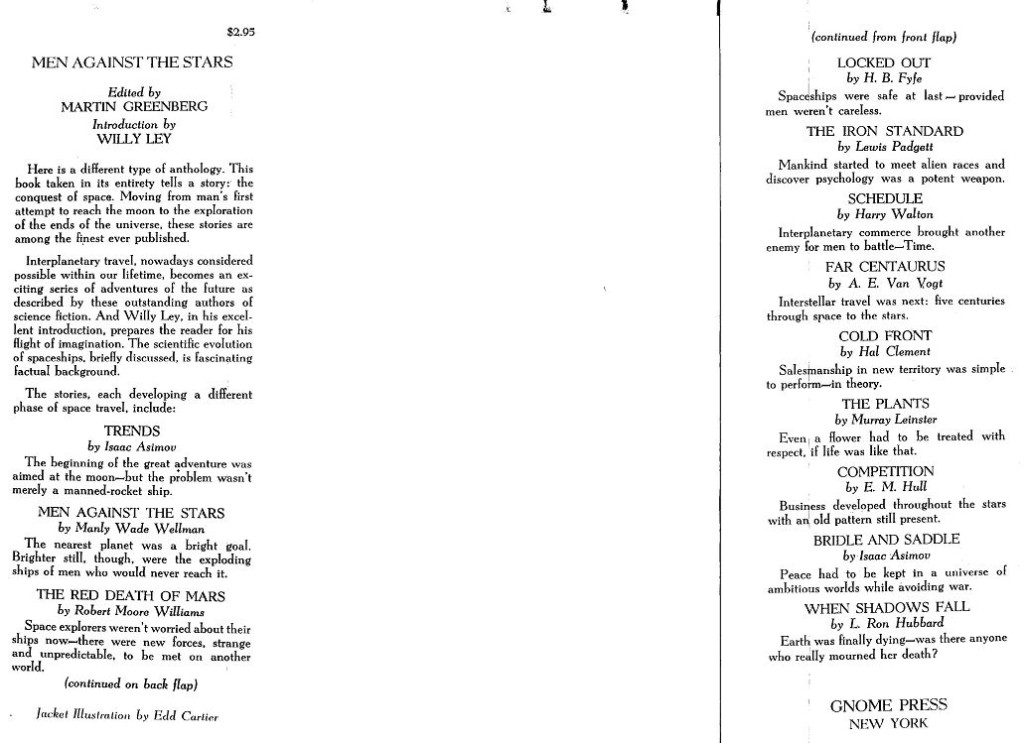 — Men Against the Stars, jacket flaps, all variants 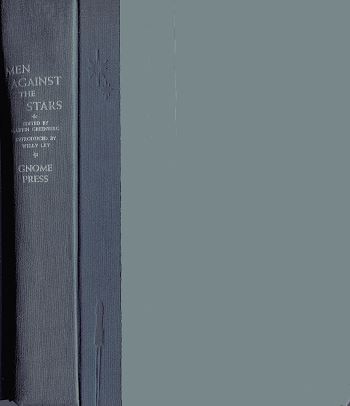 — Men Against the Stars, purple cloth-backed spine with gray boards, lettered in silver