For a nearly 80-year-old fantasy novel, the book begins with a remarkably modern sentence:

Dr. Reed Chalmers, Professor of Psychology at the General Hospital, worked out the theory of the simultaneous existence of an infinity of possible worlds. 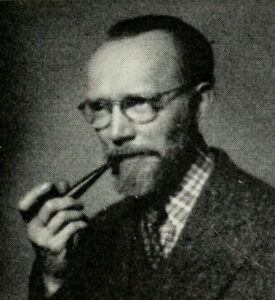 Multiverses are all the rage in cosmology today but parallel worlds were a seldom-used concept either in science fiction or fantasy in 1940 when Fletcher Pratt came up with the multiple possibilities for humor and adventure inherent in sending protagonists into the world of story and myth. 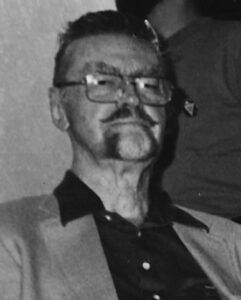 He teamed with L. Sprague de Camp, then just breaking into regular sales, for a series of stories they sold to John W. Campbell’s Unknown Fantasy Fiction. “The Roaring Trumpet” (May 1940) and “The Magic of Mathematics” (August 1940) were incorporated into The Incomplete Enchanter, published in 1941 by the prestigious mainstream publisher Henry Holt. Prime Press, a rival small science fiction press to Gnome, reprinted it in early 1950, a year after they published de Camp’s similarly-themed Lest Darkness Fall. 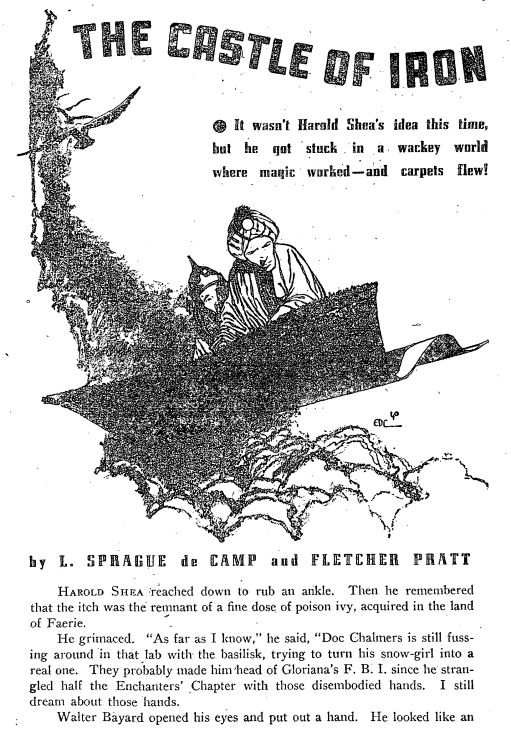 At just about the same time in 1950, Gnome published de Camp and Pratt’s The Castle of Iron, an expansion of an Unknown novella from April 1941, presumably for no better reason than confusing bibliographers. That’s because this title is the sequel to The Incomplete Enchanter and not Gnome’s earlier de Camp and Pratt book, The Carnelian Cube.

I can understand why both of them did it. Publishing books randomly because you can get the rights, though, is not a long-term business plan.

Castle does have perhaps the oddest second binding tell of any of the mysterious Gnome variants. Even CURREY missed it in his first edition, although it appears in his 2002 Revision. The first binding has “Gnome Press” on one line on the spine; the second has “Gnome” and “Press” on separate lines. Imagine how easy identification would be if the number of lines always corresponded with binding state! Unfortunately, their priority is not known. My guess is that because the two-line version is so rare that it is the second binding but that cannot be proven.

[It] is a far better brand of fantasy entertainment [than Minions of the Moon].

Hardback, Red-orange boards with wine-red spine lettering and a wine-red drawing of a man riding a hippogriff on the front boards. Jacket illustration by Hannes Bok. Physically smaller than most other Gnome Press titles at 5.1×7.6 in. “FIRST EDITION” on copyright page. Printed by H. Wolff. “A Science Fantasy Adventure” on title page. Unsigned Introduction. Back cover: promotes Men Against the Stars. Gnome Press address given as New York 57.

Damon Knight, Worlds Beyond, December 1950.
There is magic in the teamwork of de Camp and Pratt that is approached by no other collaboration in the short history of science-fantasy: that rare, happy spark that fuses two talents into a third more richly productive than either alone.

The Castle of Iron, by L. Sprague de Camp and Fletcher Pratt, 1950, copyright registration 1Jul50, Library of Congress Catalog Card Number not given [retroactively 50-11580], title #7, back panel #7, 224 pages, $2.50. 3500 copies printed. Hardback, Red-orange boards with spine lettered in wine-red and a wine-red drawing of a man riding a hippogriff on the front boards. Jacket illustration by Hannes Bok. Physically smaller than most other Gnome Press titles at 5.1 × 7.6 in. “FIRST EDITION” on copyright page. Printed in the United States of America by H. Wolff. Title page and copyright registration add “A Science Fantasy Adventure.” Back panel: Men Against the Stars. Gnome Press address given as New York 57.

1) (CURREY A) Boards’ spine displays Gnome Press on one line. 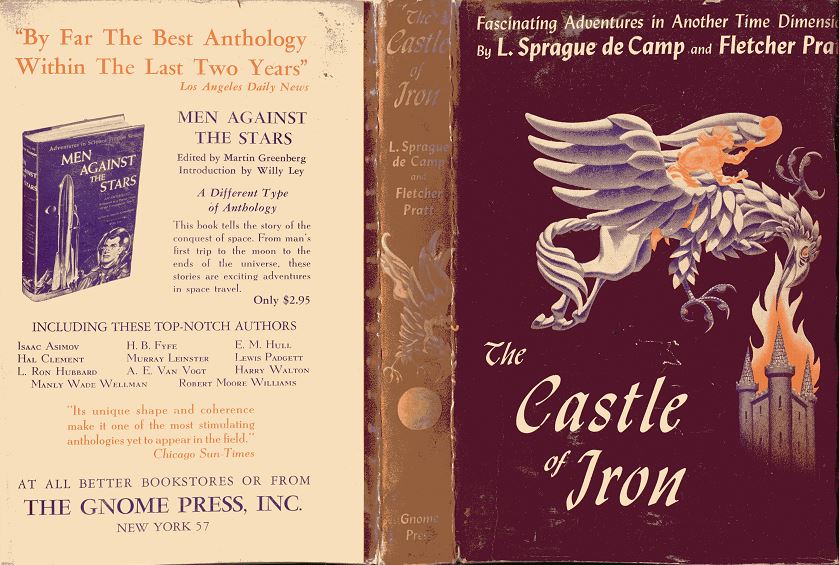 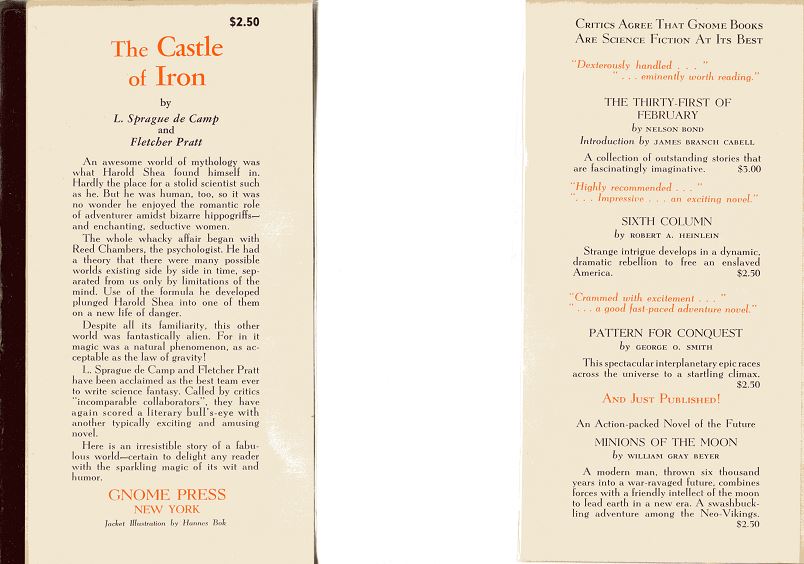 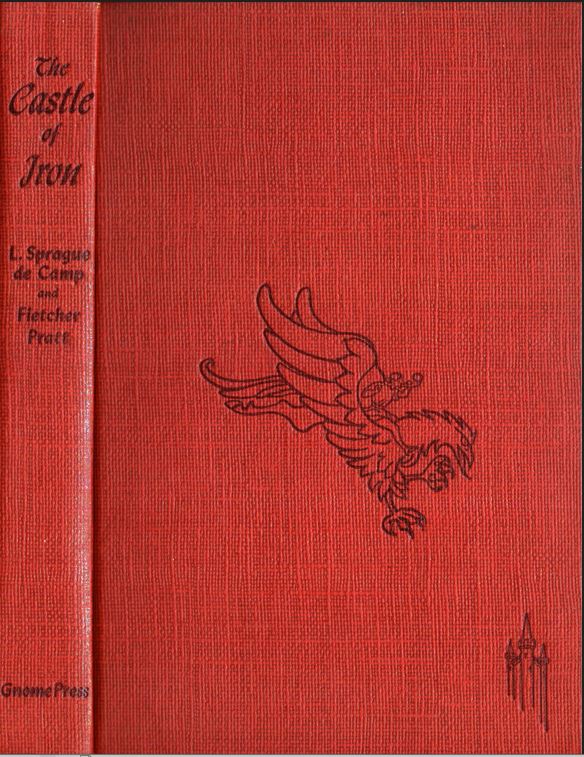 — The Castle of Iron, red-orange boards, wine-red lettering, Gnome Press on one line