Nosing out H. Chandler Elliott for the title of most obscure of all Gnome Press authors, William Gray Beyer’s birth or death dates haven’t been dug up even after decades of labor by the obsessive hunters of minutiae that is the f&f community. Just as little is known about his life, nothing more than the two sentences in Donald H. Tuck’s The Encyclopedia of Science Fiction and Fantasy Through 1968. They reveal that “he worked his way through an electrical engineering course at Drexel Institute by making and selling primitive radio receivers…” That experience, after the usual plethora of odd jobs, eventually led to a position as captain in charge of Philadelphia police radio. He also wrote two mysteries. A review of the second, from 1947, calls Beyer “a gun authority in his own right and a former member of the Philadelphia Police Force.” No record indicates what happened next, and no picture of him can be found.

His recognition in the field, such as it is, comes from four related serials in the weekly general fiction pulp Argosy. “Minions of the Moon” came first, on April 22, April 29, and May 6, 1939. “Minions of Mars,” “Minions of Mercury,” and “Minions of the Shadow” followed in 1940 and 1941. The ISFDB lists only two of the five parts of “Shadow,” in the September 20 and September 27, 1941 issues; the remaining three were in the October 4; November 1; and November 15 issues. Those were consecutive issues: Argosy stopped weekly publication after September 27. Beyer published two other f&sf short stories and four in Detective Fiction Weekly, including the genre-sounding “The Neutronium Gang.”

Minions of the Moon was the only one of the four to see print in novel form. The back covers of both Pattern for Conquest and Sixth Column promised a forthcoming Minions of Mars. It never appeared and no one knows why. Minions disappeared from the back panel lists in 1953 along with several other early titles, a sign that Gnome books were selling well. Someone must have liked it. The short-lived magazine Two Complete Science-Adventure Books reprinted Minions in the Summer 1952 issue. As with so much of f&sf, it would cease publication in 1953. (The other “book” was the first and only publication of The Cructars Are Coming by Paul Lawrence Payne, normally an editor.) The cover is far more enticing than Gnome’s. I did not, incidentally, cut off the top and bottom; the original did that. 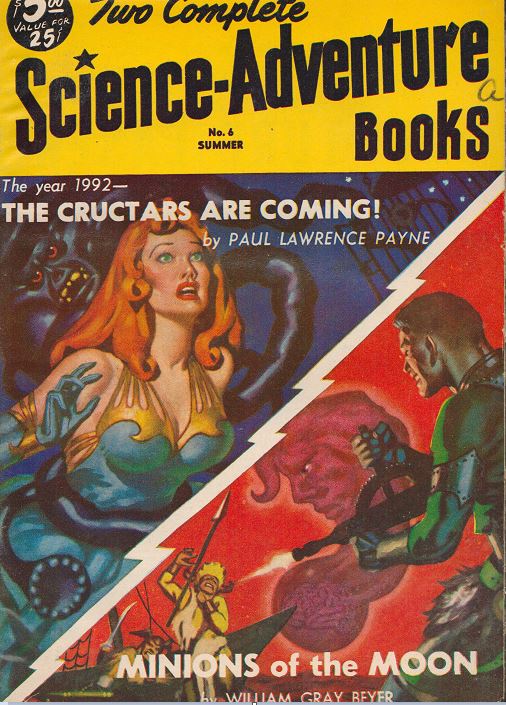 All the Minion stories are science fiction adventures about a man who is put to sleep for 6000 years by a new anesthetic, not that anybody could tell that from the mud-colored Edd Cartier cover of a bearded warrior with a winged helmet emerging from an egg and wielding an ax at a ghost-like emanation sprouting from a brain in a glass sphere. Cartier may have intended an homage to the original April 22, 1939, cover of Argosy which featured Minions as the cover story over a drawing of ax-wielding but clean-shaven warrior attacked by a dragon. 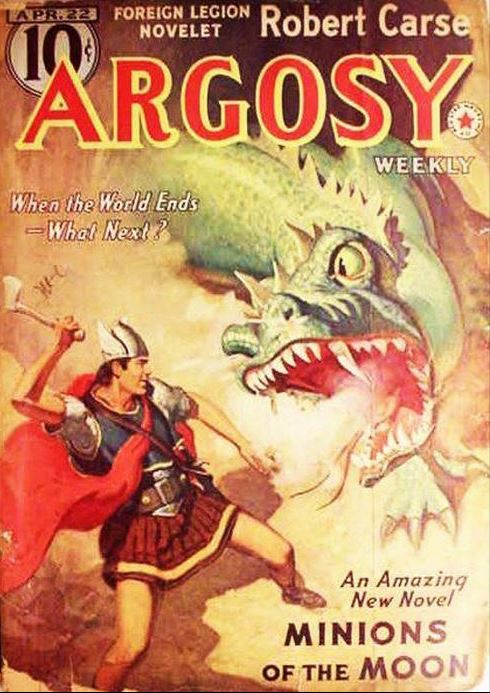 On the Gnome cover, Beyer’s name is next to unreadable in a dull red. It’s probably the most hideous (and most amateurish) of all the Gnome covers (in a narrow contest with Harry Harrison’s cover for Tomorrow and Tomorrow/The Fairy Chessmen) and why anyone thought it would sell a book is baffling.

August Derleth, Madison Capital Times, September 27, 1950
… is typical of what passes for swashbuckling space opera. Set 6000 years in the future, it has its moments but it is nothing more than adventure dressed up as science fiction.

Minions of the Moon, by William Gray Beyer, 1950, copyright registration 15Jul50, Library of Congress Catalog Card Number not given [retroactively 50-10453], title #8, back panel #8, 190 pages, $2.50. 5000 copies printed. Hardback, gray-green boards with spine lettered in maroon and the title and a crescent moon cut out against a maroon rectangle on the front boards. Physically smaller than most other Gnome Press titles at 5.1 × 7.6 in. Jacket design by Edd Cartier. “FIRST EDITION” on copyright page. Printed in the United States of America. Title page and copyright registration add “A novel of the future.” Back panel: 2 titles. Gnome Press address given as New York 57. 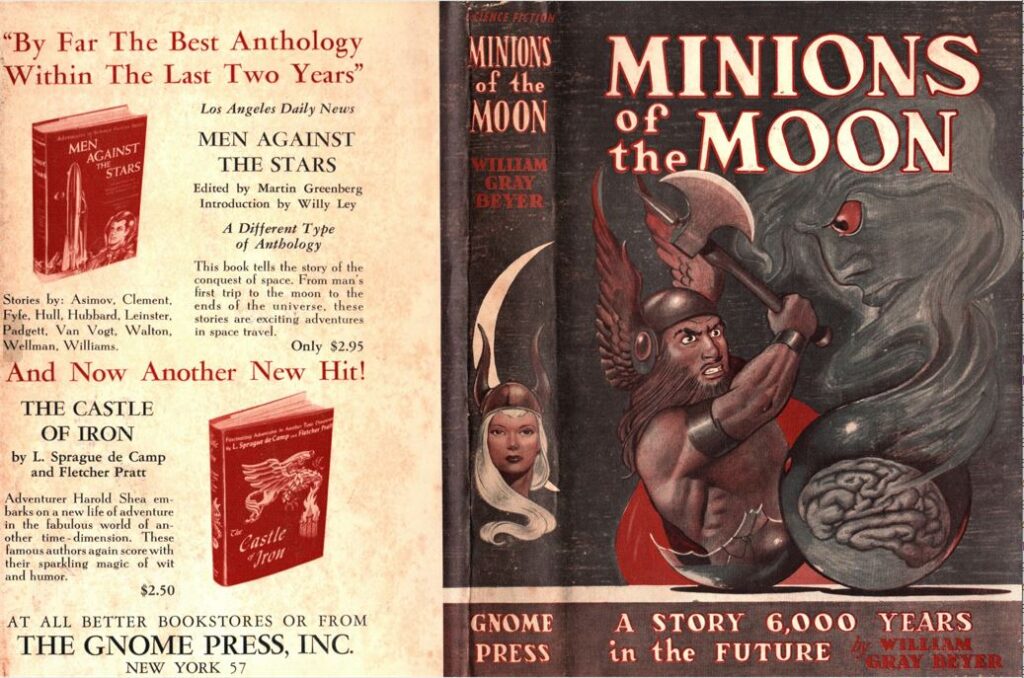 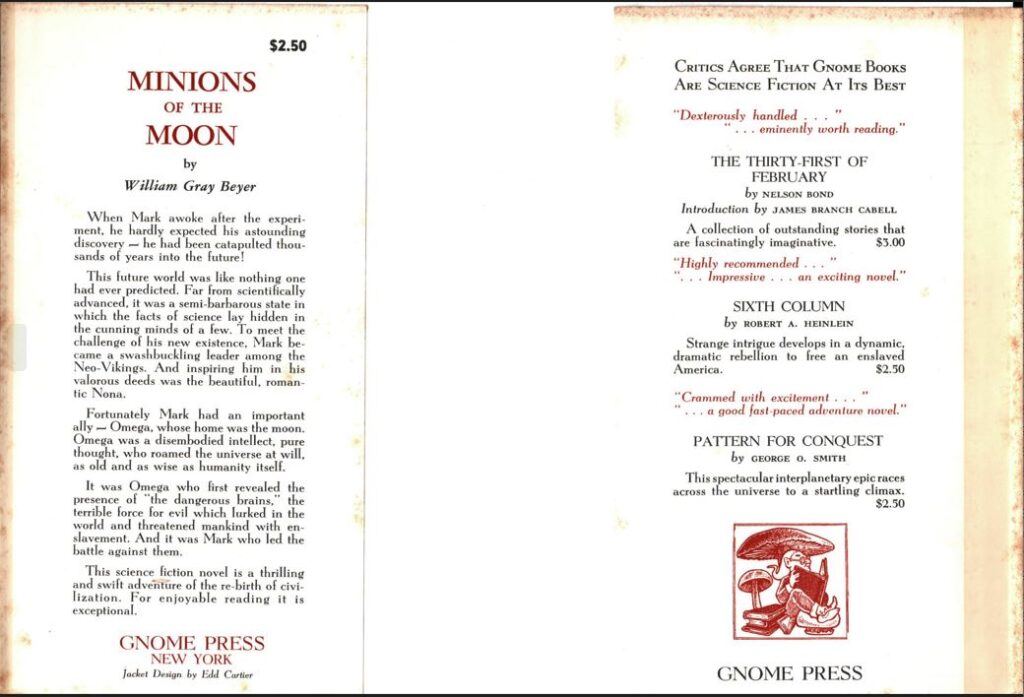 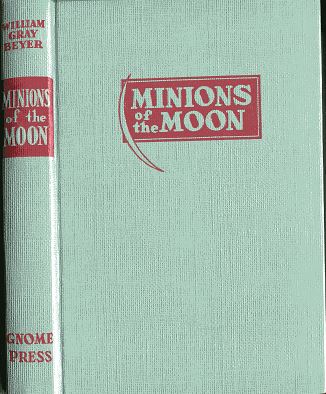